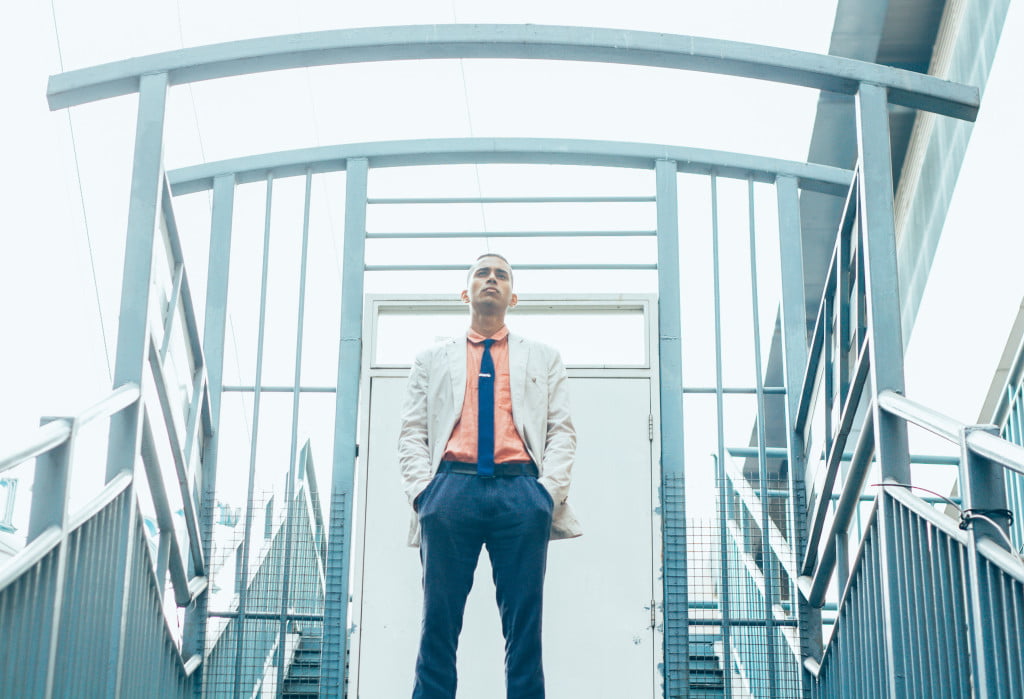 You may think that I am trying to channel ‘Sonny’ from Miami Vice, but you can tell by my face that I am displeased. Because summer sucks. Why you ask? Because it’s too hot to layer, so all my jackets stay in. And I have to wear linen. I abhor linen. Maybe not linen blends, but pure linen is horrible. It just sucks. Picture this. You wake up, decide to wear these pretty pastel linens you bought because hey, its summer, linen is breezy, and who doesn’t like pastels? So you see a couple of wrinkles and decide to iron them out. After some deft application of heat, you put on the crisp garments and bask in crayon colored glory. 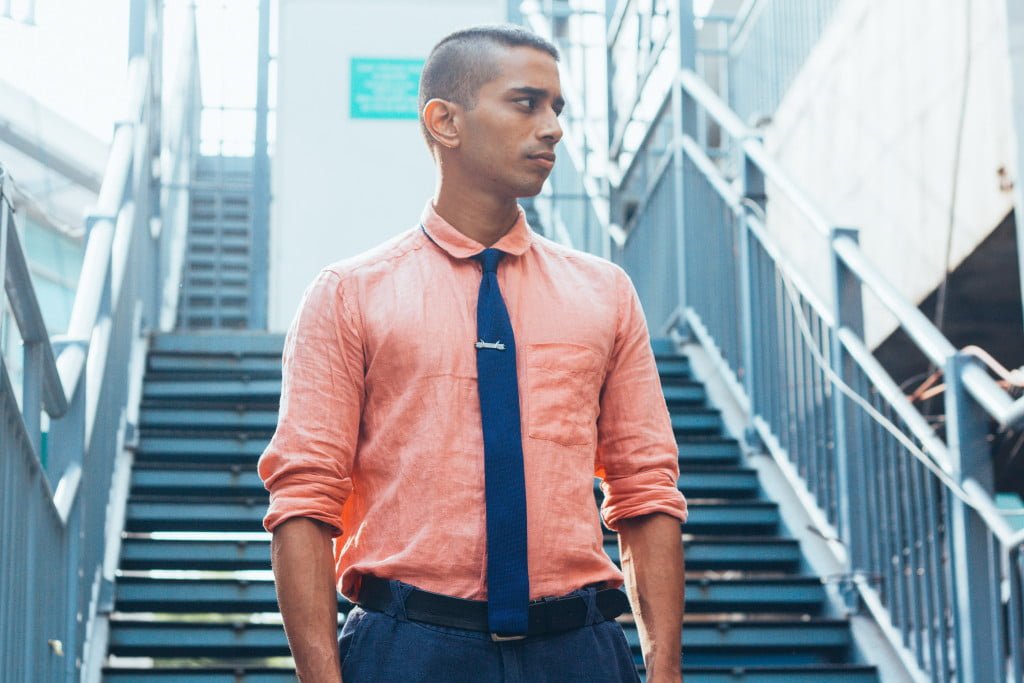 Five minutes later, from just breathing, you go from hero to hobo. Just like that. Your collar twists just by looking to the side. You have to waddle to keep your knees from wrinkling. Forget about sitting down. That is your life in linen. Still want to do this? Thought so. Enough with the negativity, fact is that when it comes to staying cool in summer, nothing beats good linen. 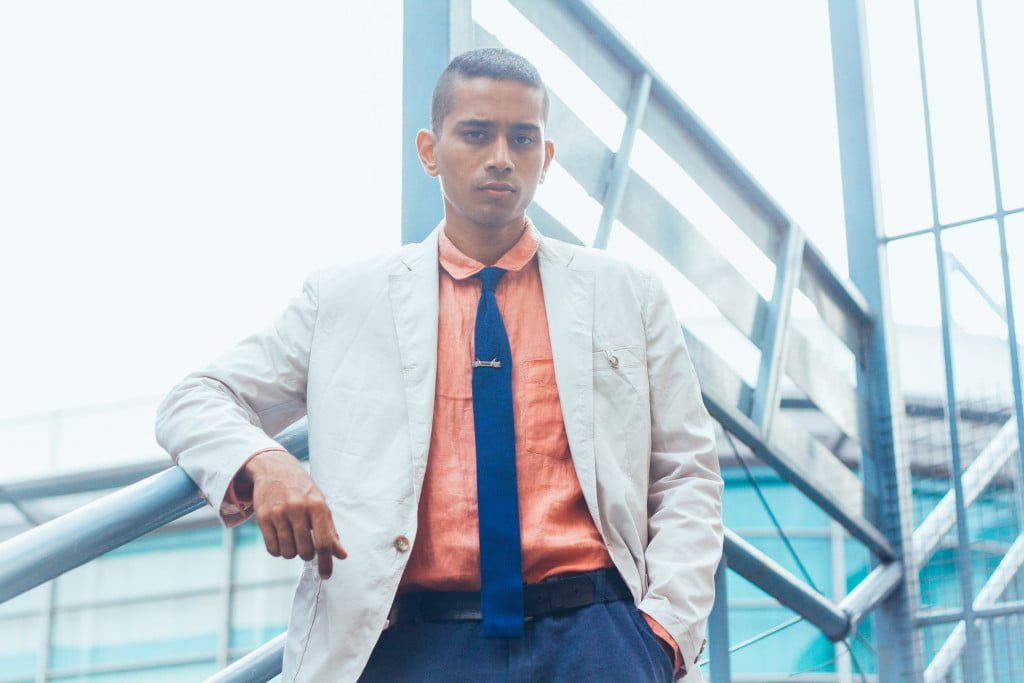 Linen is a natural fibre made from Linum usitatissimum, a flax plant. This expensive fabric has been in production for over 4,000 years now, with evidence suggesting the presence of linen manufacturing industries in ancient Egypt. It was coveted during the Victorian Era by the upper classes for its soft feeling against the skin, when used in bedding. Today, textiles account for a vast majority of all linen produced, clothing only forming a small percentage. Good linen is expensive. It takes a lot more effort to cultivate and harvest linen than say, cotton, and due to the laborious processes involved in combing, spinning and weaving linen, the prices stay high. Linen produced using machines is almost always of lower quality. Much like cotton’s thread count measure of quality, the quality of linen is measured in ‘lea’. For example, a fine linen handkerchief is between 40 and 50 lea. New linen will be stiff to the touch, so there isn’t a way to actually discern quality at the outset, but always make sure that there are no knots in the fabric before buying. Of course, Italian linen is the finest and no one has embraced this wrinkly fabric like European men have, creating comfortable nonchalant everyday looks, that you can pull off too! 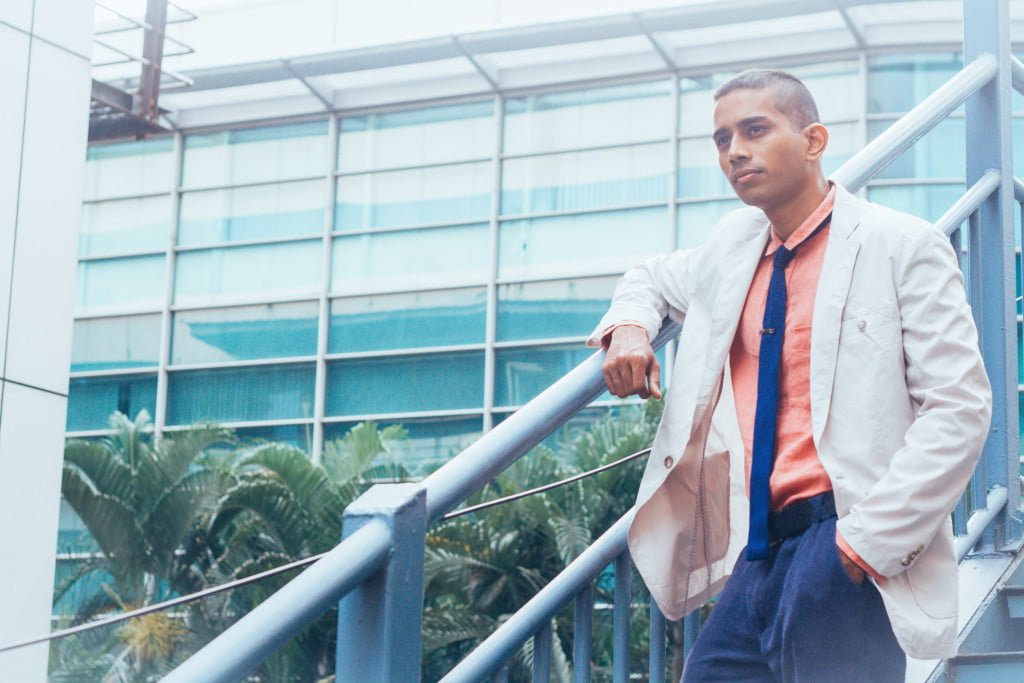 In the summer, whether you are a layering man or not, wearing heavy materials like corduroy or tweed will only make life harder. Due to its low thread count, linen is highly breathable. It also wicks away sweat easily and is hypoallergenic, making it the ideal choice for the harsh Indian summer. Linen is also 30% stronger than cotton, thereby making it more durable. This means that your linen shirt feels softer over time and lasts a lot longer than any of your cotton shirts. 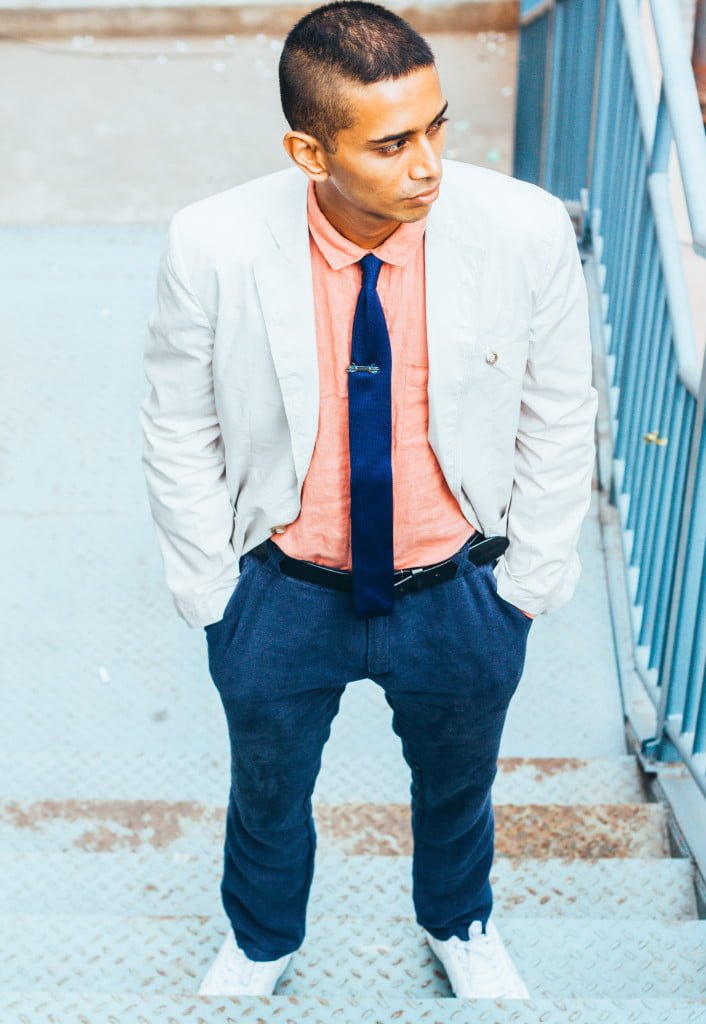 So embrace those wrinkles and feel the breeze, for wrinkles only add character to a man, they say. A navy linen suit is one of the things I would love to own, and feel that everyone should own. Other neutrals like beige are good too. Peach works really well with navy and I really like the details on these trousers like the cross-shaped belt keepers. Do not be afraid to wear pastels. Ever. Remember that no matter what people say, if you feel comfortable and confident in the clothes you have, nothing else matters. 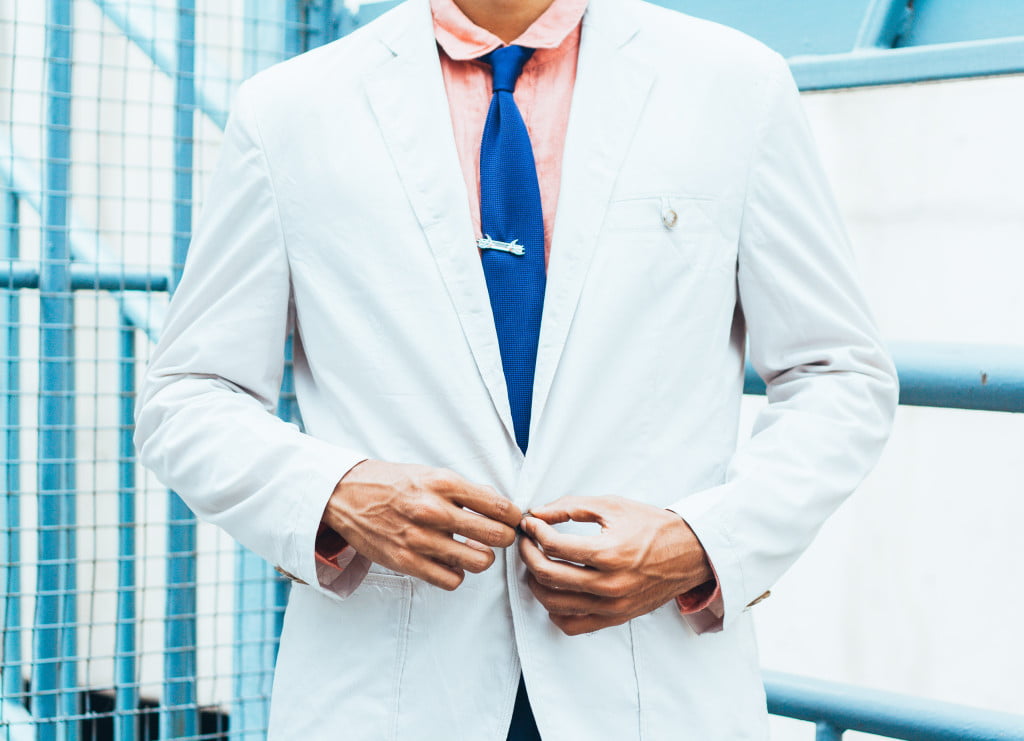 Continuing with the disheveled luxury theme, you can see that my tie pin has become lopsided, much like my collar, just from a little walking around. Embrace the nonchalance. But what I’ve realized, is that linen shirts are not meant to be worn with ties. If you buy a shirt like the one here, which lacks a stiff collar, then your tie will end up warping the collar every time you turn your neck. One solution is to simply buy a linen-cotton blend, or buy one with French cuffs. Linen shirts worn casually with a pair of shorts and espadrilles make for a great laid-back look for those summer brunch meetings and even the beach! 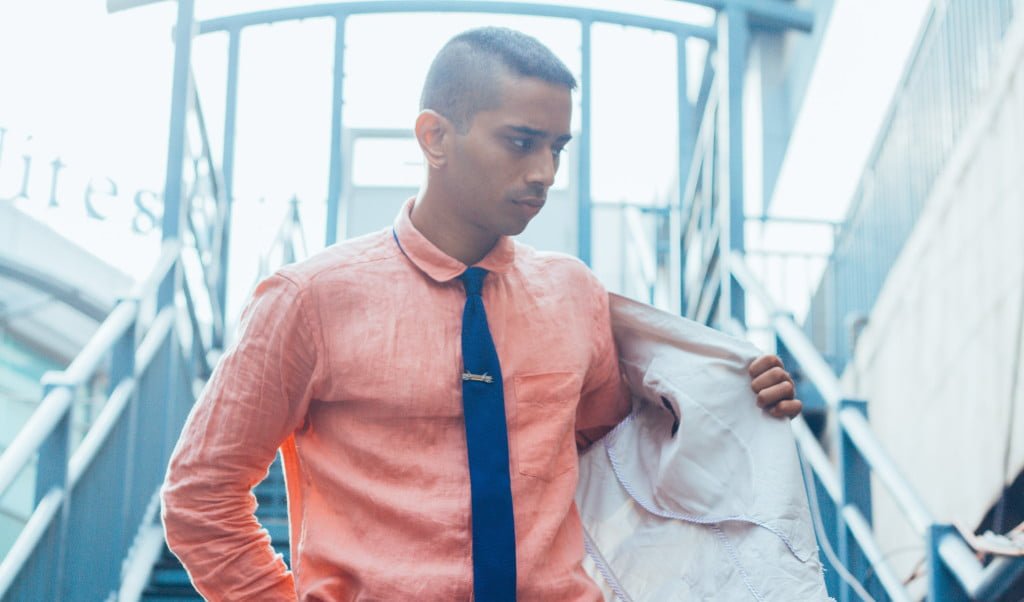 The blazer I have on here is deconstructed, meaning that it completely lacks a lining or any padding. The complete antithesis of the 80s power suit. Cut close to the body, they fit like overshirts, are extremely comfortable and are easy to dress up or down. A must-have in any mans summer wardrobe. Linen is lightweight, literally, so this outfit felt like wearing air.

Coming to footwear, white Air Force Ones complement the jacket, and finish up this outfit nicely. Sneakers with everything is a thing now, but keep in mind that whatever shoes you pick, they should be clean and as uncluttered by branding and designs as possible. Even simple Converse Chuck Taylors can do the trick.

Linen has been a luxury staple for years now. I think the only reason I’ve wanted to wear linen is hearing rappers like the Notorious B.I.G and Nas endorse expensive linen in their music. So in spite of its cons, linen is a menswear essential and a great fabric that will keep you cool and looking refined on any occasion.  I still hate it though. And so does veteran British actor Bill Nighy. This is what he had to say about linen in an interview:

“Never trust a man in linen. I can’t relax around a man in a linen suit. Men in unstructured suits are unsettling and the greatest offenders are those who risk linen. I can’t go to the South of France any more, because I can’t survive all that linen. Tuscany is obviously a no-go area in summer, too. If I ruled the world, all men wearing linen suits would be arrested for crimes against aesthetics.“

Guess I’d better change before he takes over the world. 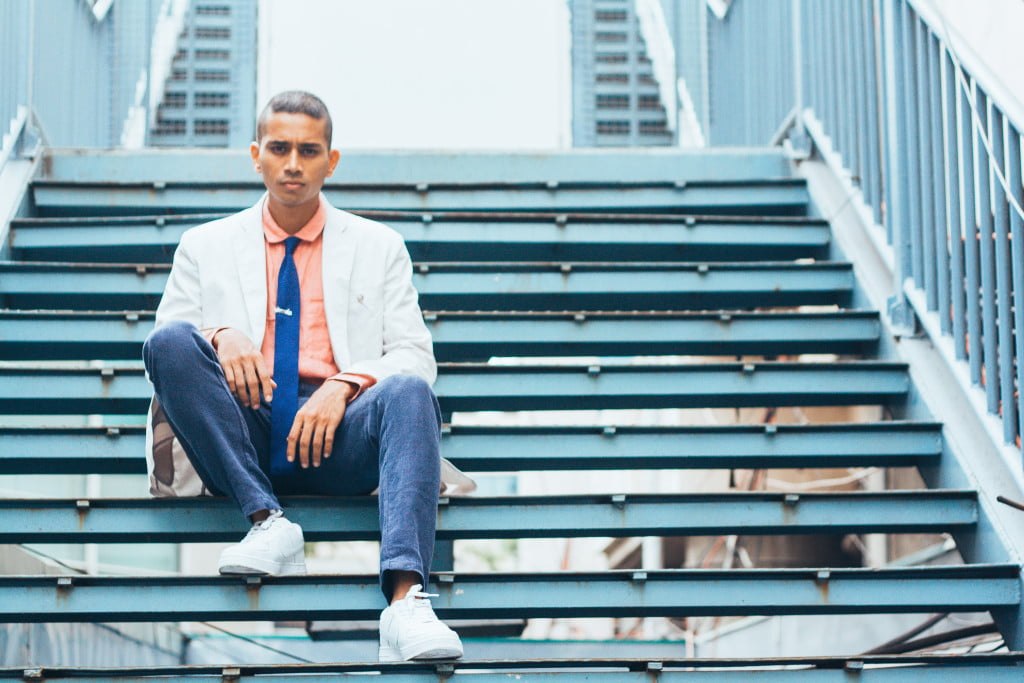